SAATBAU LINZ was founded on 22 May 1950 through the consolidation of five regionally operated cooperatives. Since then, SAATBAU LINZ eGen has always been the largest Austrian farmer’s organisation for plant breeding and seed production.

The first years of OÖ Landes-Saatbaugenossenschaft

Johann BLÖCHL, deputy provincial governer of Upper Austria, was the driving force behind the foundation of OÖ Landes-Saatbaugenossenschaft, the Upper Austrian provincial seed production cooperative. He initiated the foundation upon realising that breeding, seed multiplication and distribution should be united under one roof and that high-quality seeds were essential for the reconstruction process and the future of the country. The primary objective was to self-supply Upper Austria and the other provinces and to avoid overproduction. The result was the consolidation of five individual cooperatives to form the OÖ Landes-Saatbaugenossenschaft reg.Gen.m.b.H with a central management and administration in Linz and four branches for seed take-over and processing.

The first steps towards the foundation of this Upper Austrian cooperative had already been made in 1945. At that time, a lack of quality seed had lead to the establishment of five seed associations in Upper Austria: in Arnreit, Freistadt, Linz, Wels and Otterbach. Investments were made in breeding stations for potatoes, cereal and feed plants.

Potatoes, cereal crops, clover and grass seeds were processed at the agricultural vocational schools of Ritzlhof and Otterbach, in monasteries like Schlägl and Reichersberg and at Weinberg castle. The seed cooperative Anzberg near Schärding had been founded back in 1923 and focused on potato breeding.

The following years saw investments into the Upper Austrian seed cooperative. The vision was to establish a tight organisation, to concentrate breeding efforts to only a few locations, to select the best farms for seed production, to invest into processing and distribution and to establish cooperations with the custumors – and this vision was brought to life.

The enlargement of the cooperative

During the following years, the focus was on the enlargement of the cooperative. A breeding station for cereal and feed plants was established in Reichersberg, another one for potatoes at the Lamplmairgut near Kefermarkt and the branches in Antiesenhofen, Arnreit and Kefermarkt as well as the headquarters in Linz Wegscheid.

One of the major events was the construction of the headquarters in Linz-Wegscheid in 1962, where, for the first time in Austria, a ‘Lose take-over chain’ was installed. 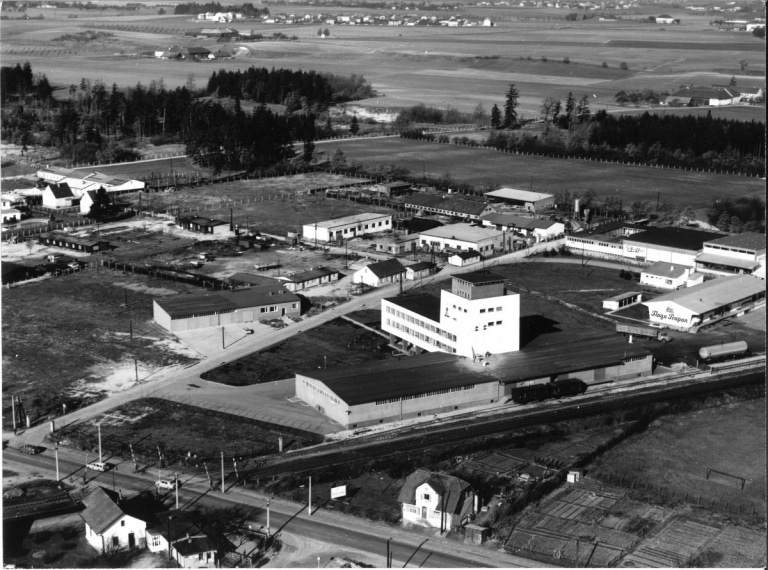 At the beginning of the 1970s, a new management developed internationl ambitions and embarked on international business. The connections with French maize breeders were reflected in variety representations for maize and seed maize production increases in Feldkirchen/Danube in the second half of the decade. Seed maize became more and more interesting and a significant amount of money was paid in licence fees to French breeders. This led to the decision to get SAATBAU LINZ’ own maize breeding activities started.

1980 marked the kick-off of hybrid maize breeding. Developing hybrids in the maturity range of FAO 200 to FAO 350 became the top priority. This led to the enlargement of the maize breeding station Schönering. Until then, the Upper Austrian location Feldkirchen and later also Schönering worked almost exclusively on the selection of licence varieties, as maize breeding was only in its infancy. As early as in 1986 however, the varieties COMET and MAGNET were registered in Germany.

1984 saw the enlargement of the seed processing plant Kefermarkt with a Silo for up to 2,250 tonnes. Three years later, the central warehouse in Leonding was further enlarged by the addition of container drying facilities for maize, seeds of poppy, caraway, coriander or linseed and legumes and the construction of a seed processing plant and silage space for 10,800 tonnes.

Until the end of the 1980s, the focus was on Upper Austria. The construction of a testing station in Weikendorf (Lower Austria) was the first step out of Upper Austria. A former farm operation was rented for quality wheat breeding and variety tests.

The overproduction of cereal at that time led to an increased demand for rape seed, sunflower and soybean seeds. Thanks to the good connections to foreign breeders, suitable varieties were made available. 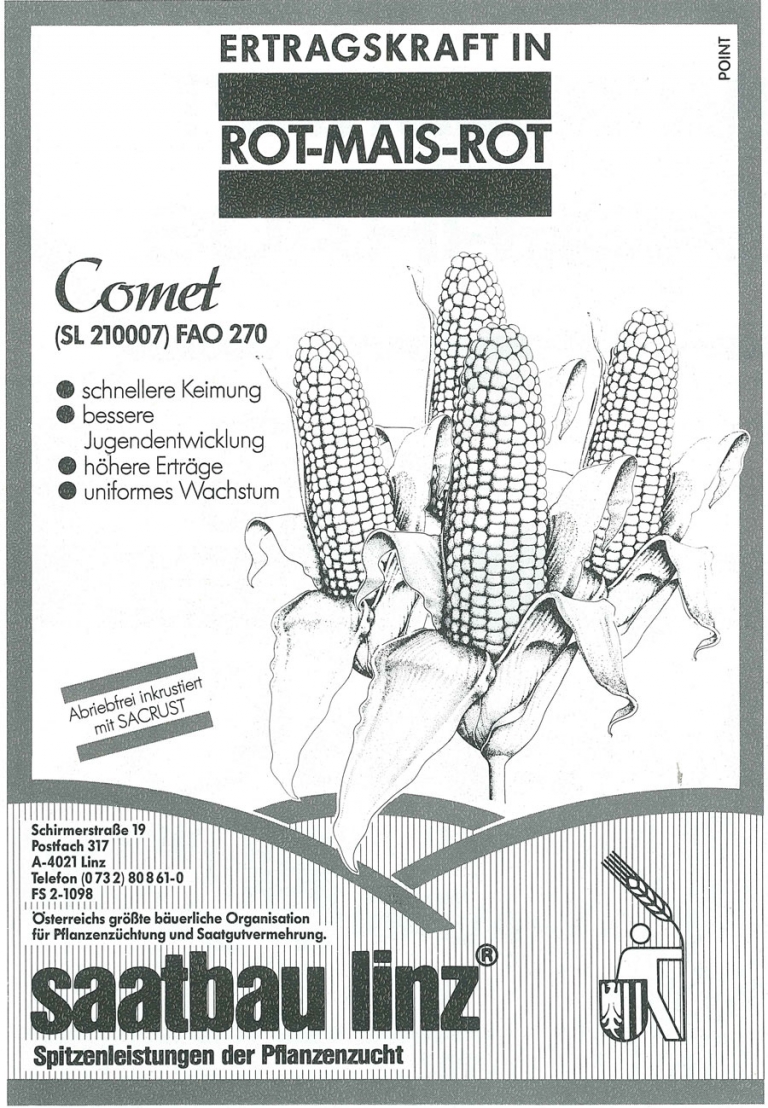 Extension of the shares in other companies

This decade was marked by changes, transformation and new horizons. On a national level, Count Waldburg Zeil acquired the seed plant and plant breeding operation in Neuhof Rohrau and paved the way for sales in Eastern Austria. ‘Burgenland Pflanzenzucht’ was part of the deal and allowed SAATBAU LINZ to become a member of ‘IG Pflanzenzucht’ in Munich. This facilitated entry to the German market.

Austria’s accession to the EU was already in the air in 1992 which meant a new market situation and new rules for seed trade. This, combined with the fall of the Iron Curtain in 1989 and the opening of the markets of Eastern Europe led to the establishment of subsidiaries in the Czech Rpublic, the Slovak Republik and Hungary starting in 1996.

1994 marked the year of the successful RAPSO rape seed oil project with VOG AG, which recently celebrated its 25th anniversary and for which SAATBAU supplies the certified raw material rape seed, cultivated and delivered by contracted farmers.

At about the same time, SAATBAU took over OÖ Kräuterbaugenossenschaft, a cooperative of herb farmers, aiming at supplying products from certified production. A specialised production site was established in Kefermarkt producing primarily poppy seeds, caraway and herbs.

In 1996, maize breeding was reorganised, the number of test sites was increased, a winter breeding station in Chilewas established and the breeding methods were modernised. Breeder Robert Taucher has produced more than 100 maize hybrids for the European market since 2003.

Into the new millenium

The foundation of Saatzucht Donau as a joint venture of Probstdorfer Saatzucht and SAATBAU LINZ laid the foundation stone for further breeding activities for cereal as well as oil and protein plants. The commercialisation of the newly developed varieties is organised independently by the mother companies.

This chance to intensify the international development meant that more and qualified staff for product development were employed and trained at SAATBAU LINZ and also an intensification of seed production in Austria and its neighbouring countries. 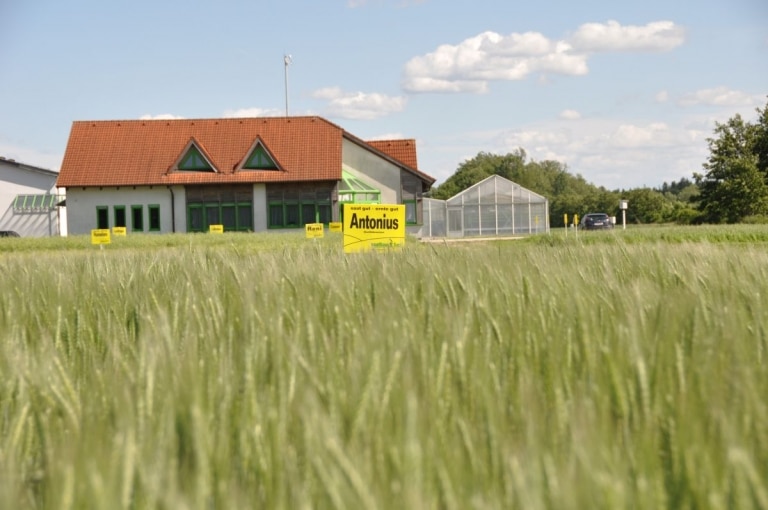 In 2003, SAATBAU LINZ Russia was founded as a 100% subsidiary of SAATBAU LINZ. In 2009, SAATBAU LINZ aquired 85% shares of the seed company Centrala Nasienna in Poland with five locations for seed production, especially maize and cereal.

2006 saw the foundation of Crop Control Agrarproduktion und Handels GmbH, which was renamed to Saatgut Erntegut GmbH in 2013.

On a national level, SAATBAU LINZ invested in its sites in Leonding and Kefermarkt, by buidling a seed processing plant in Leonding and a cleaning and treatment plant for seeds and herbs in Kefermarkt. In Geinberg, the Innviertel branch was reconstructed and equipped with silo space of 2,400 tonnes for take-over and processing of cereal and alternative crops. In Schönering, the ILP Center for the production of inbred lines was built to process maize inbred lines and seeds for multiplication.

In 2013, subsidiaries were founded in Slovenia and Ukraine, and a year later in Romania and France. In Austria, SAATBAU PREISGUT was founded as a subsidiary of SAATBAU ERNTEGUT, a take-over and storage site was aquired in Antau and Bio Getreide Burgenland was founded. The Hirschhofer company was acquired, which was then merged with SAATBAU ERNTEGUT a year later and developed into Bio Food Grade Pöttelsdorf.

The production of maize seed is more laborious, complicated and expensive compared to the production of cereal seed. This is why, in 2014, € 25 million were invested into a large-scale plant which supplies almost all European countries with maize seed from predominantly domestic production.

70 years after its foundation as a regional cooperative, SAATBAU LINZ has become an international enterprise with 16 subsidiaries and shares in other companies in Austria and abroad. SAATBAU LINZ exports high-quality seeds to 35 different countries around the world. 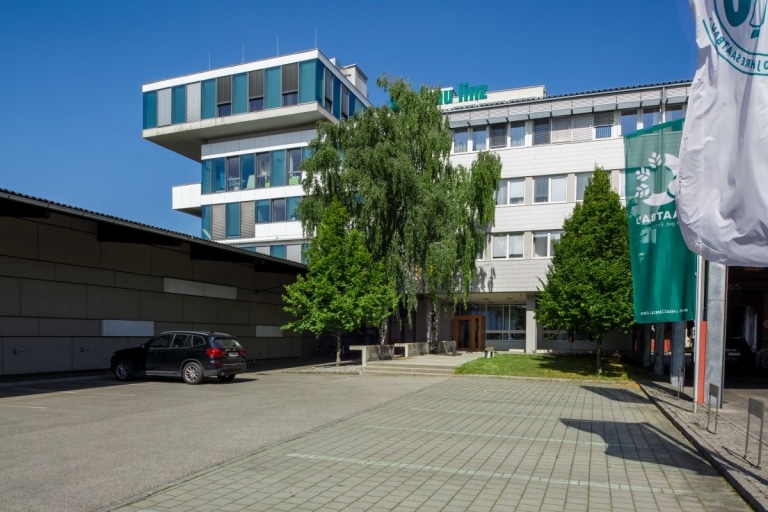