SAATBAU ERNTEGUT has been a partner of the Austrian Competence Centre for Feed and Food Quality, Safety and Innovation (FFoQSI) since July 2020.

The aim of this research institute is to make food and food production better, safer and more sustainable – along the entire value chain. With our project, which we are carrying out in cooperation with the University of Applied Sciences Wels and in the framework of FFoQSI, we pursue the same objective. In this research project, we are investigating the safety of organic soybeans for human consumption in relation to tropane alkaloids.

Tropane alkaloids occur naturally as secondary metabolites in plants. When ingested in food a relatively small amount of this substance can result in symptoms of poisoning. They are especially dangerous for small children and people with heart conditions. More than 200 different tropane alkaloids are known – the lead substance and marker used to determine the presence of tropane alkaloids in the raw material, i.e. the food, are atropine and scopolamine.

High tropane alkaloid concentrations are common in white thorn apple (Datura Stramonium) and black henbane (Hyoscyamus Niger), which occur as weeds in late emerging crops such as millet, buckwheat, maize, soybeans and pumpkin and are wide-spread across Austria. Changing climate conditions as well as an increase in surfaces managed according to organic farming standards are the reason for this spread, but a lack of awareness by farmers also plays its role.

In our project with the UAS Wels we focus on thorn apple because of it is predominant and more frequent occurrence in the traditional cultivation areas for organic soybeans for food production secure. Thorn apple is an exuberant annual plant which can reach heights of up to 2 m. Its lobed leaves and its remarkably large trumpet-shaped white to light purple flowers make it easily recognisable. Its name comes from the spiny 5cm large fruit with four chambers which pop open at maturity, releasing numerous brownish-black seeds.  These seeds are very robust and can survive up to 40 years in the soil depending on the depth. Even immature seeds are capable of after-ripening and germinating. Each capsule contains between 100 to 800 seeds, so depending on the growth conditions, a thorn apple plant can produce between 1,300 and 30,000 seeds.

Thorn apple plants are thermophile, they germinate late (starting in mid-May) and bloom from June to October. They prefer soils rich in nitrogen but occur also in wastelands and on waysides. Depending on the soil type, the root system can be either shallow and not very ramified or densely ramified with a tap root. It spreads into crop lands through contaminated seed mixes for intercrops, through compost input or through long term idle land. 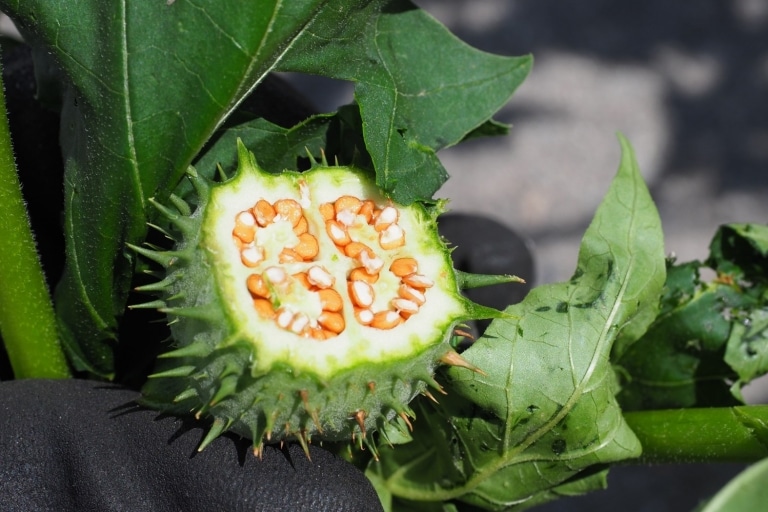 Since thorn apple matures simultaneously with late summer crops, its tropane alkaloid containing seeds can enter into the food production chain. This gives rise to problems, especially with small- grained crops such as millet. With larger grained crops such as soybeans or maize, the toxic seeds can be sorted out. Since the green thorn apple plants are harvested together with the crops, toxic sap spills and disperses over the harvest in the combine. The consequence: an invisible contamination. Since there is no rapid test available, the harvest can only be examined and analysed for tropane alkaloids, once it has been stored.

According to a model calculation by FIBL (a research institute for organic farming), one thorn apple plant in the fields is enough to contaminate the yield at threshing by spilling toxic sap. It is thus not sufficient, to sort out the thorn apple seeds from the crop seeds after harvesting. It is crucial to mechanically remove and dispose of the entire toxic plant at as early a development stage as possible.

The EU has not defined compulsory threshold values for the tropane alkaloids Atropine and Scopolamine except for complementary cereal products for babies and toddlers which contain millet, sorghum or buckwheat and derivatives of such products. A threshold of 1 µg/kg for Atropine and 1 µg/kg for Scopolamine was fixed by the European Commission for these products. The European Food Safety Authority (EFSA) however has determined a health-related guiding value of 0,016 µg/kg per kg of body weight. This acute reference dose (ARfD) refers to the amount of a substance per kilogramme of body weight, which can be ingested in a meal or in the course of a day without appreciable health risk to the consumer.

Objectives of the project

Over the past year, product recalls in Germany due to contamination with tropane alkaloids have increased the sensitivity of food processors as well as traders of raw materials. Since mid-2019, we have thus carried out an internal monitoring of our soybean production for food at SAATBAU LINZ focus is on raising awareness among producers in order to tackle the problem in the fields.

Additionally, we aim to compile basic knowledge and expertise on the issue within the company. Together with our research partner, the University of Applied Science Wels, we thus work on a variety of questions on the topic. One of the most important objectives is to find out more about the behaviour of tropane alkaloids in processing and the individual treatment and processing steps of soy food.

We want to understand the issue along the entire value chain and minimise the risk of contamination in the final product thanks to the knowledge gained. 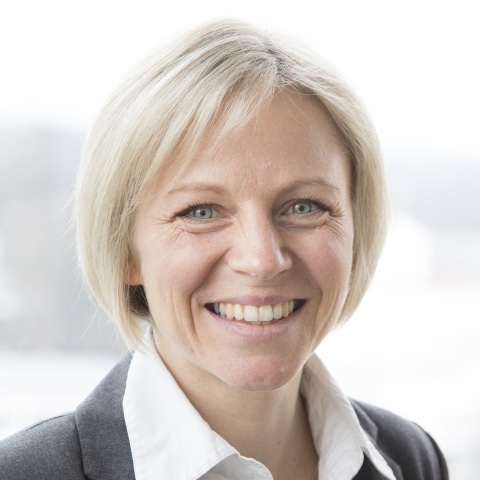 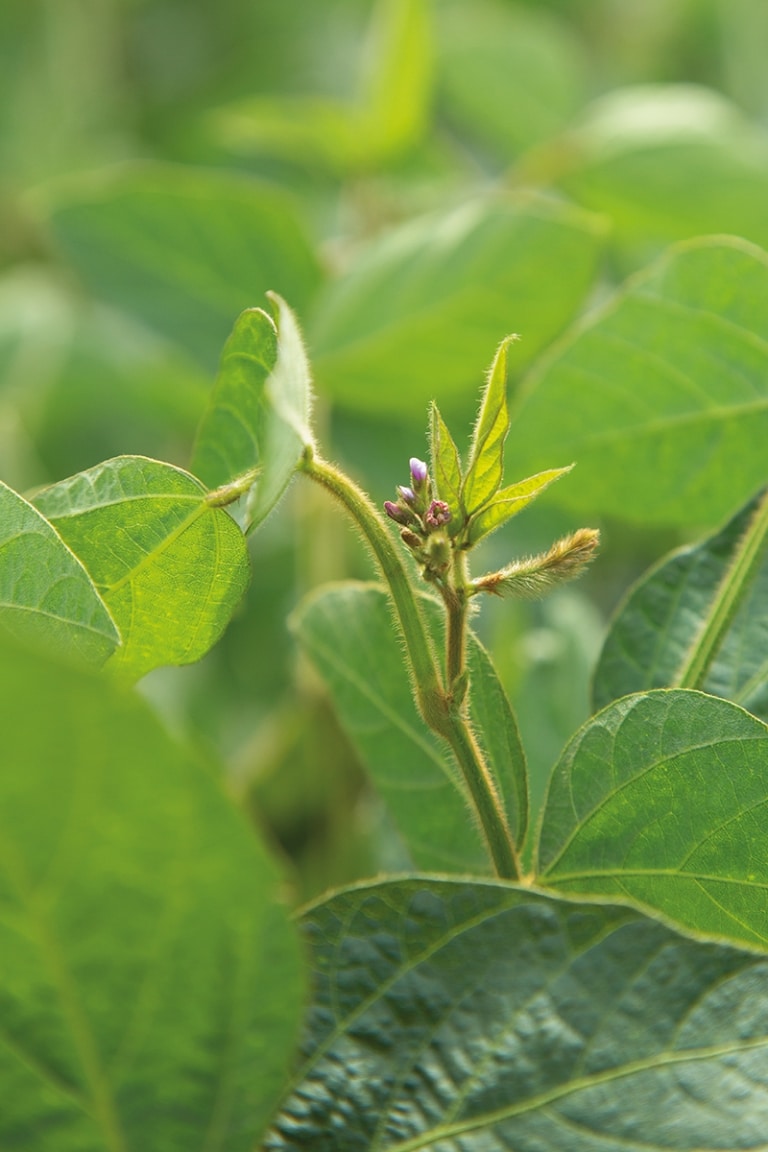 Interview with the managing directors on the new initiative 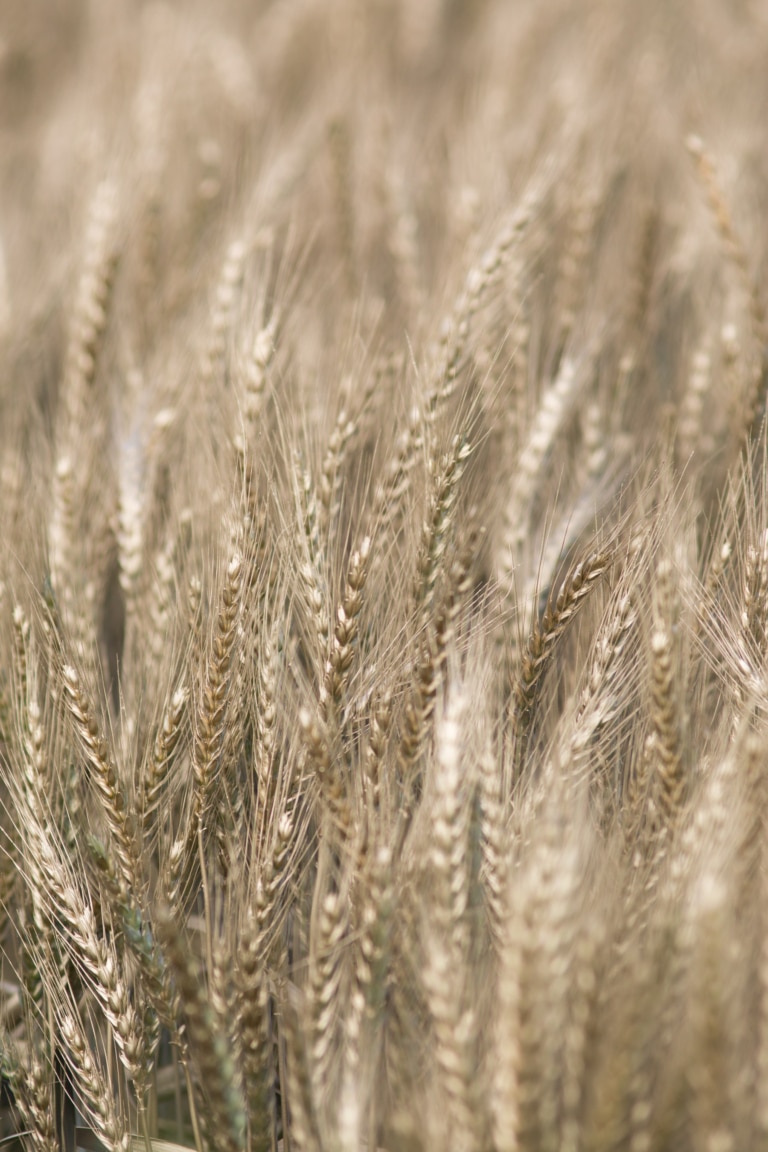 AURELIUS received its Austrian license in winter 2016. This was no surprise to us, but not… 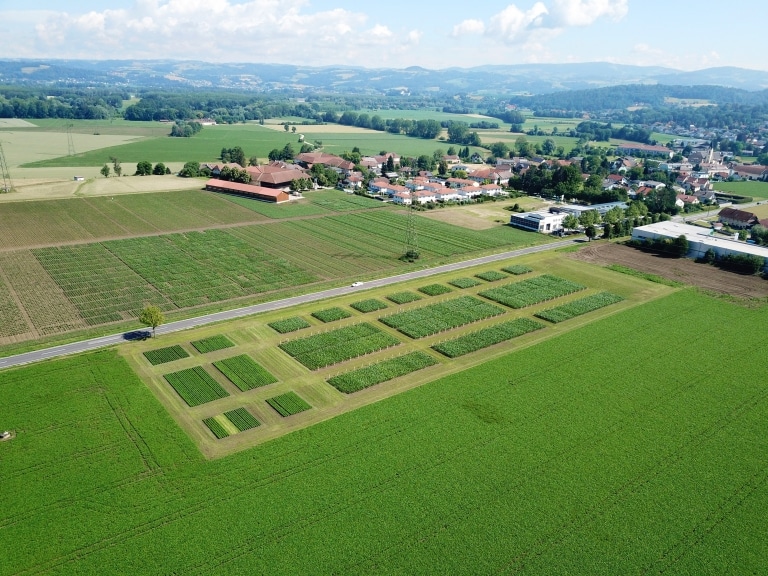 Regionality – from breeding all the way to the registered variety 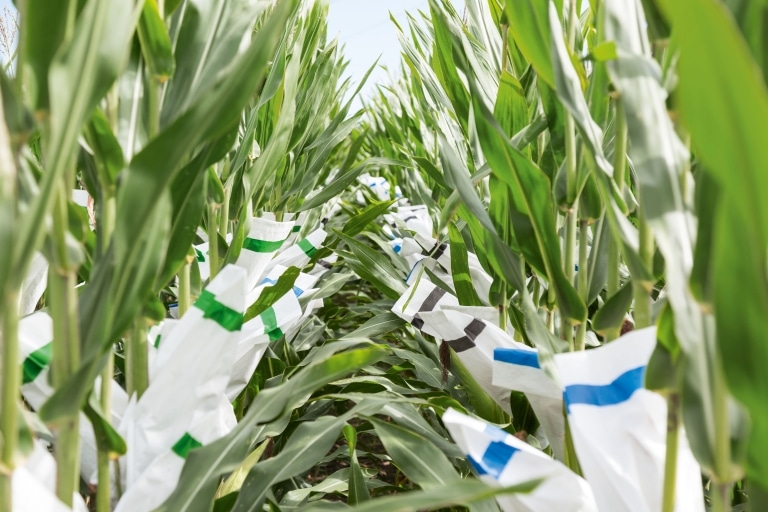 Prospects and opportunities for seeds and varieties 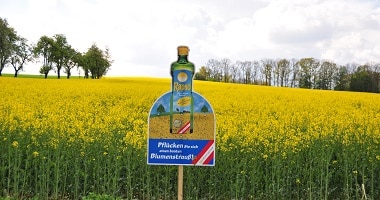 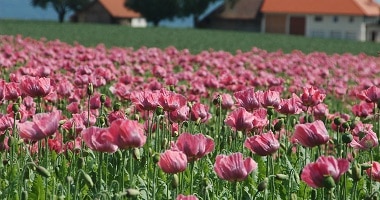 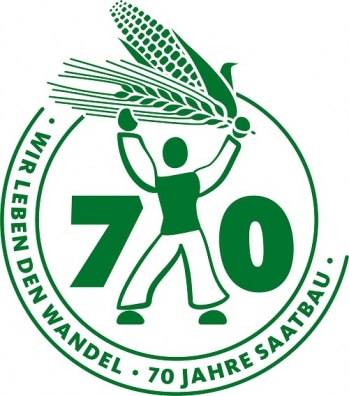